Noah Young is a New Orleans based jazz musician who is best known for being a founding member of Jazz/Funk band Naughty Professor, and is currently one of the most sought after bassists in the area. Born in the rural state of Vermont in 1991, Young started learning the Bass Guitar at the age of 12. In 2010 at the age of 19, he moved to New Orleans, LA to pursue music more seriously. Between 2010 and 2015 Young studied jazz formally at both Loyola University and University of New Orleans, graduating from the latter in 2015 with a Bachelor’s Degree in Jazz Studies. His band Naughty Professor have released 3 studio albums and played over 400 shows in more than 35 states. 2015 saw Noah Young taking up the role of bandleader for the first time when he started the Noah Young Band. In 2016, he started Party/Funk band Raw Deal featuring members of Naughty Professor and Dexter Gilmore from Sexy Dexand the Fresh on lead vocals. Noah has recently released two solo ablums, 2018’s “Start The Reactor”, and on March 25, 2019 Young released “Splinter” along with it’s three singles, “Splinter”, “Six Million Ways To Die” and “Testify”. 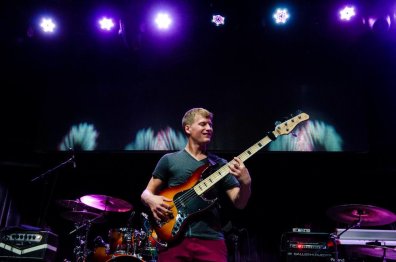 “Testify” begins with an energy filled shuffling high hat setting the tempo for Young’s tight and funky bass lines. The rest of the band joins in on an infectious and up-tempo groove full of rhythmic layers and harmonic blending. The horn section tells the story with tight phrases full of quirky bounces before heading into a heaver groove led by a crunchy electric guitar riff. The song blends elements of jazz, funk and bluesy rock into a fun celebration of sound. The intricate changes that bring the band from section to section are flawlessly executed and complex without being indulgent, the composer making smart and tasteful decisions. A funky breakdown showcases Noah’s amazing bass playing that bops along with a percussive and melodic purpose. Each section shines a light on a different instrument while the band maintains its rock solid foundation. The track explores several different moods and vibes, smoothly channeling through a diverse series of feelings and tempos.  You can listen to “Testify” on our Prime Cuts Playlists and follow Noah Young on the links below. Please continue to support artists like Noah and share this music with everyone you know.