Home › Blues › Scottish Widows – “Down For The Count”

Scottish Widows – “Down For The Count”

Scottish Widows is a hard-hitting bluesy rock band from Staten Island. They began as a cover band started in November 2010 by members Mikey Vee and Carl Rizzo, later adding bass player Al Russo to round out their sound. Eventually out growing the cover band model, they embarked on the road to writing and playing original music. After working with various vocalists, the band found their perfect missing link with Rick Cabrera. The band credits its bluesy rock sound best compared to the likes of early Led Zeppelin, Bad Company and Aerosmith. Scottish Widows have built up a strong following of fans and spent time as the supporting act for many legendary artists. 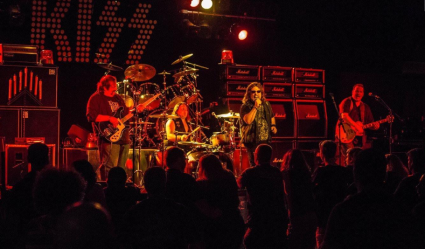 The track “Down For The Count” is everything a badass rock song should be. It starts with the powerhouse vocals of Rick Cabrera. His voice is strong and forceful with lyrics about never backing down to match. The band behind him is tight and they waste no time immediately getting into the groove and hitting you with their huge sound. The lightning fast guitar riffs of Carl Rizzo are stylish and full of attitude. The whole band then goes into a series of exciting instrumental refrains and riffs all held together by the rhythm section of Russo and Mikey Vee. This band is ridiculously tight and flawlessly takes this song in many different directions. This is a must for any classic hard rock fan and a guaranteed electrifying live performance. You can listen to “Down For The Count” and follow Scottish Widows on the links below. Please continue to support artists like Scottish Widows and share this music with everyone you know.