Cliffs and Caves is a mother/daughter indie folk duo out of Texas. Lindsey and Claire Justice released their debut EP “Hold On” in 2017, recorded with Grammy-nominated producer Jamie Candiloro (Ryan Adams, R.E.M., The Eagles) and featured performances by legendary Willie Nelson harmonica player, Mickey Raphael. In February 2019 the duo released their Chris Jacobie produced sophomore EP “Capsize” to rave reviews, including one from us for the track “Goodbye For Good”.

Cliffs and Caves are back with a new single that takes a different approach than their previous releases. On Friday September 27th they released the fierce indie-rock song “Defiance”. The song was written as a battle cry for people who couldn’t speak up for themselves. The track was deeply inspired by an interview from a victim of sexual violence, and aims to say, “we won’t be quiet anymore”. 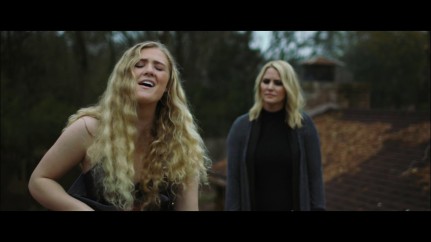 “Defiance” begins with a super cool and moody groove that is layered with soulful electric keyboards and poignant string sections. The commanding vocals deliver the message with strength and purpose, while the patience in the music lends to the songs importance. The instrumentation has a very 70’s feel that gives you an introspective tone, leading the listener to reflect on the meaning of the words. The chorus comes in like a freight train and amplifies the energy of the song with the raw emotion behind the vocals. The strings and harmonies give the sound such a deep feel and bring an epic quality while leading from the spacious and airy verses to the powerhouse chorus. They end the track with an absolutely explosive instrumental section with huge layers of guitars driving the sound into the stratosphere. It’s very rare that you get a song where the music so perfectly and accurately matches with the story being told, an epic musical performance framing the incredibly important statement. You can listen to “Defiance” on our Prime Cuts Playlist and follow Cliffs and Caves on the links below. Also check out the video for “Defiance” directed by Scott Brignac. Please continue to support artists like Cliffs and Caves and share this music with everyone you know.