Home › EDM › The Delerium Trees – “Back Through The Door”

The Delerium Trees – “Back Through The Door”

The Delerium Trees are an independent duo from Turriff, Aberdeenshire in North East Scotland. The band consists of Drew Jarvie and Steve Barker. Drew is the band’s founding member, songwriter, vocalist and multi instrumentalist who has played, toured and appeared with several bands, including brass bands and orchestras. Steve has mainly played for cover bands in North East of Scotland. After Perfect Stranger split up in 2001, the two formed The Delerium Trees and began working on original music. In February 2018 they released the song “Back Through The Door” 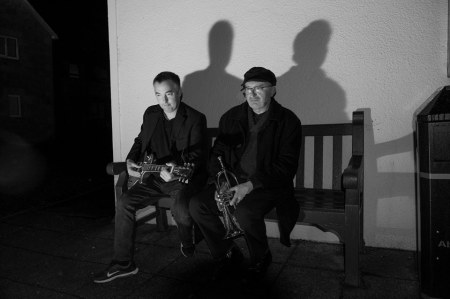 “Back Through The Door” begins with a hypnotic drum pattern with futuristic tones and a glossy coating. The vocals are darkly thoughtful and melodically expressive, the music slowly and tastefully builds energy into the chorus. The main hook of the song has an upbeat and celebratory vibe while remaining emotional and a little haunting; the size of the sound grows larger into a giant movement. The duo plays between these dynamics very well, having a more quiet verse before the drums kick the chorus over the edge. The instrumental sections show the talents of the players between thick layers of synths and aggressive soulful guitar riffs. The song ends with a bright and euphoric explosion before stylishly thinning out into simplicity. You can listen to “Back Through The Door” and follow The Delerium Trees on the links below. Please continue to support artists like The Delerium Trees and share this music with everyone you know.