The Impersonators are a sixties flavored pop-rock duo formed in 2013 by Tommi Tikka, a multi instrumentalist and the other half of Finnish pop/rock band Carmen Gray’s songwriting team, and lyricist Antti Autio. Their goal is to “nurture and cultivate the creativity, spirit, and warmth that graced the pop records of yesteryears.” 2018 saw several releases from the band including “Burning Blue”, “Broken Snow”, and “Effigy”. In March 2019 they released an EP titled “Sad Café” to positive review, and followed it up with the song “Circus”. The Impersonators are back with a new single set for release on Friday, March 27, 2020; “Cloud Nine”. 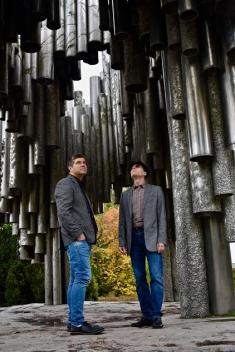 “This tune started taking shape after a therapy session,” Tikka explains, “…during which I was made to reflect on what my role has been in pretty much each and every one of my relationships. Although it was hard to admit at first, I soon came to realize that I’ve always been the so-called “designated driver,” the one who abstains from getting what he wants so those around him can be content…. Unaware of my soul search, Antti sent me a beautiful poem about a couple growing old together.” Musically, Tommy knew just where he needed to go. “The melody came easily, in just one sitting. I knew the chorus had to be uplifting, so I knew where to go musically. I did turn to my wife Elina for help once again and she came through just as she always does with that haunting guitar riff that opens the song.”

“Cloud Nine” begins with a grungy guitar riff before the full band kicks in with a steady and slightly whimsical groove. The song sets a mellow tone but you can feel its leading somewhere, the unique vocals begin to tell the story. It has an epic chorus that has a perfect sing along melody and a gigantic sound. The verses are full of spacey keyboard tones and guitar riffs, giving it a mysterious 70’s rock vibe mixed with the contemporary pop feel. The music and lyrics create an interesting and almost darker picture than the uplifting poppy style of the chorus, a chorus rounding out with a perfect hook. A slight change of tempo takes the song into another realm before settling back down for the classic rock n roll guitar solo. One final chorus with all of the layers shooting at once sets this song into your mind as something with power and purpose. The Impersonators also released an extended version of “Cloud Nine” along with the original.

Accompanying the song is a stylish video that was a new challenge for the band. “This was the hardest music video to make so far. So many good ideas had already been used and I really enjoyed the one we made for “Circus,” which meant the bar was set high.” Finally a unique idea arrived. “As the song was inspired by a therapy session, I figured that this is what the music video should be about as well: psychotherapy. Only instead of the focus being on the patient, we decided to make the video about the psychiatrist, someone who is strained by dealing with his patients’ issues, locked inside his mind, struggling with his many troubled and twisted egos, attempting to pull himself together while between sessions.” The core of the script was mainly the brainchild of Tikka’s wife Elina Suominen, then the band teamed up with Tuomas Palola to help to complete their ideas and to film and edit the final product.

You can listen to “Cloud Nine” on our Prime Cuts Playlists on Spotify and Youtube and follow The Impersonators on the links below. Please continue to support artists like The Impersonators and share this music with everyone you know.